3D TV sets for the home are becoming increasingly popular, although they’re not for everyone.

The UK broadcast industry is taking 3D to a new level, and we explore 3D in more depth.

3D on TV is something that UK broadcasters have dabbled with over the years,and normally involved wearing silly red and blue 3D glasses. Since then, things have moved on, and it’s now possible to get a decent 3D experience at home with the latest generation of 3D TV sets. The only problem at the moment, is what to watch.

In 2009, Sky announced that they were about to start taking 3D very seriously, and this was followed by the release of a dedicated 3D TV channel, Sky 3D in 2010, and TV set manufacturers are working hard to bring more 3D TV sets to the market at decent prices. Home 3D looks set to become big business.

Indeed, with cinema attendance dropping, we can expect to see a string of blockbusters coming to our screens in 3D, as shown by the relative success of “Monsters Vs Aliens” in the UK in 2009, and the release of the visually-stunning Avatar in 3D.

Samsung won the race to release the first consumer 3D TV set in the UK. In April 2010, Samsung released their UE40C7000 and UE40C8000X LED HD TV sets. These are 40 inch models, and use Active Shutter glasses to achieve the 3D effect. The TV sets also have Freeview HD built-in. 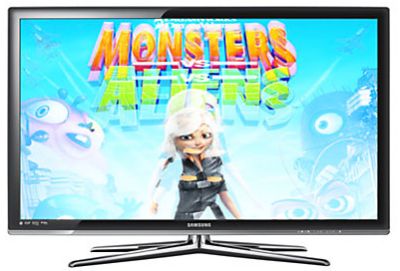 3D TV channels in the UK

Sky launched the UK’s first dedicated 3D channel on the 3rd of April 2010. Sky 3D is available on Sky Channel 217, and is part of the Sky World subscription package.

How does 3D TV work?

Most people will be familiar with the classic red-and-blue 3D glasses. These were used for the Channel 4 week of 3D in November 2009. This uses the ColorCode 3D system, developed in Denmark. 3D footage is shot on stereoscopic cameras (twin-lens), then encoded with ColorCode before broadcast. Users needed to wear special glasses with amber and blue lenses to see the 3D effect.

It’s accepted that the twin-colour 3D glasses are OK for use to get a taste of the 3D experience, they’re really only useful for “gimmick” 3D viewing.

The 3D experience in cinemas, and now in the home market, use one of two technologies, Passive or Active:

In April 2010, Samsung’s Australia site issued some health guidance information on viewing with their Active Shutter glasses. The full article is on the Samsung website, but here are the highlights:

Got a question? Ask in our forum