This page contains a review of ‘Benny Hill – The Lost Years’, a new comedy DVD released in August 2005.

For fans of British comedy, the name Benny Hill needs little in the way of introduction. Many of us grew up on his cheeky humour on this half hour comedy shows. Benny Hill is, of course, no longer with us, but what many may not realise, is just how lone Benny Hill had been a part of British TV – It’s a lot longer than you may think.

The Benny Hill Show began its long run on BBC Television way back in January 1955, and has been loved by many for generations. If you’re a fan of this classic British entertainer, you might be interested to know that there’s a DVD out there, that you may want to track down – “Benny Hill – The Lost Years“. This first became available in August 2005.

This DVD features a compilation of vintage Benny Hill material showing just what an all-round entertainer and great funny man that Benny was. His comic style established him as one of the UK’s most naughty, but loveable, comedians.

This DVD is a must for anyone who appreciates all things “Benny Hill”, and it shows a more creative and considered side of his comic skills – no high-speed running around, or slapping bald-headed chaps on the head… this is more reliant on accents, clever comic timing, and observed humour.

The DVD contains content from 1958 to 1968, and is mostly in black-and-white. On the disk, you’ll find three full-length episodes:

These episodes feature Benny in a variety of guises (obviously), and feature appearances from famous faces such as Patricia Hayes, June Whitfield, Jeremy Hawk and Peter Vernon. Some of the sketches include: 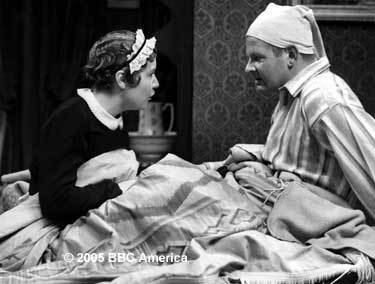