Blue Peter on the BBC

In October 2008, Blue Peter celebrated its 50th birthday. On this page, we look back at the show, and review a book celebrating the life of Blue Peter.

In 1958, the average house cost less than £2,500 and petrol was 24p a gallon. There were just two channels of black-and-white telly… and a new TV show appeared to entertain the nation’s kids… Blue Peter.

Named after the flag that’s lowered after a ship sets sail on a new voyage, the show has enjoyed 50 years as the flagship children’s TV programme, and just about everyone has some memory of Blue Peter in their formative years.

What do you remember about Blue Peter?

Whatever your memory – chances are, you’ll find something of interest in this book…

Released to commemorate the show’s launch on 16th October 1958, this book charts the history of the show. It’s written by Richard Mason, a series producer who was also responsible for editing over 500 editions of Blue Peter’s editors.

The book includes a foreword from Biddy Baxter, a name synonymous with the series over the years. 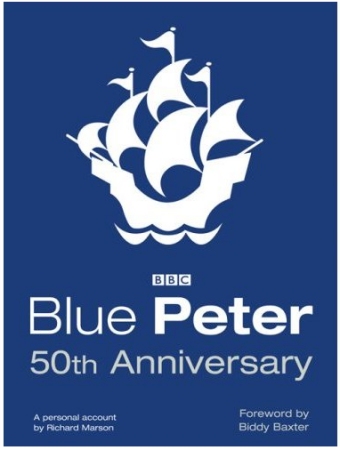 The book tells the story of the UK’s longest-running children’s programme and has a number of sections:

Pages 178 to 185 feature some of the famous faces that have appeared on the show – Goodies, Wombles, Daleks, plus the likes of Elton and Sir Cliff. Elsewhere in the book – Morph getting his Blue Peter badge, Percy Thrower in the Garden, the Blue Peter Train, plus the story of the show’s nautical theme tune “Barnacle Bill”.

In hardback and with 192 glossy colour pages, this is a surprisingly good read, with a number of insights into what went on behind the cameras, and contains hundreds of on and off screen photos of Blue Peter life.

You’re sure to have more than a few of your own Blue Peter memories, and we’re sure you’ll be able to find them in this superb celebration of the Beeb’s finest kid’s TV show.