We were struggling to find a review of this 64Meg handheld dictation machine before we bought one. To help anyone that’s been considering buying one, this page contains a few notes on this handheld recorder.

This has the following specs:

The recorder has a built-in memory of 64Mb and records in two modes: High quality (240 minutes recording) or Low quality (1080 minutes). Rather than write a product review, we’ll provide a quick summary of the functionality, and tell you the things we think you want to know…

The ET880 is very easy to use – it can either be used as a digital voice recorder (via the built-in mic or an external mic), or as an MP3 player. It has a small built-in speaker, which is adequate for listening back to recordings or MP3 files.

PC connectivity is via a supplied USB cable. On Windows XP, no special driver was required, and a drive appeared in My Computer for copying files between recorder and PC. 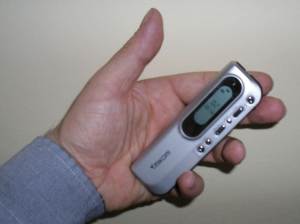 The Mikomi in hand

Recordings are made in the .act file format, and a small application, called acset.exe , is supplied on the CD to play these files back on a PC and to convert them to MP3. Once converted, the resulting file is an MPEG Audio Layer-3
32Kbps MP3 file. The following short file was recorded in Standard-Play and converted from the native ACT file format to MP3 using the supplied software: Test audio file

As you’ll hear from the test file, audio quality is acceptable, but pretty basic – don’t expect to be able to use the audio for anything other than basic playback and transcribing of audio – although with a better mic, results may improve.

In summary, for it’s price (under £30), this is quite a capable recorder – the audio quality is pretty low (as expected from a unit like this), but it has some nice extras – such as the external tie-clip mic, MP3 playback, and the little adapter kit that allows recording of phone calls. With four hours of higher-quality audio recording, it’s a handy gadget for recording meetings, capturing family tree notes or other similar activities – the mic is quite sensitive, so can pick up quiet background sounds. PC connectivity is also a bonus, as most digital recorders of this type don’t support copying audio to a computer.

Thanks to site visitor Richard Langner for submitting the following:

I just bought the ET880 from Aldi (31 Dec 2006). It looks and performs just great, although the instruction book reads like a bad translation. Here are some comments: