A closer look at the Creative Zen Micro

There’s quite a range of handset portable audio devices out there, most notably, the Apple iPod… On this site, we’re far more interested in Creative’s new Zen Micro because as well as playing MP3 audio files, the Zen Micro has something extra, notably FM radio… This page take a deeper look at why this is a great buy… 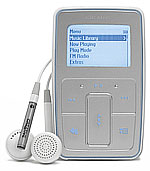 Creative’s Zen Micro appeared in November 2004, and is a great alternative to the Apple Mini Ipod. As the name suggests, it’s micro-sized and fits naturally into the hand, placing the touch-sensitive control pad in the  perfect position for navigation with just one finger. The Zen Micro will store up to 2,500 songs in WMA or 1,250 in MP3 on its 5GB hard disk, and its easy-to-remove rechargeable battery delivers up to 12 hours of high-quality digital audio. FM radio and voice recording further extend its versatility. The Zen Micro is ideal for use with on-line music services and Windows PCs, supporting downloads at up to a song per second via its USB 2.0 port.

We’ve had our hands on one of these little beauties for just under a week, and are very impressed. As stated in the advertising blurb above, the Zen Micro naturally going to be compared to the iPod Mini – and compared very favourably – It’s smaller, has an FM radio and have 5gigs of storage space (verses the iPod Mini’s 4Gig). 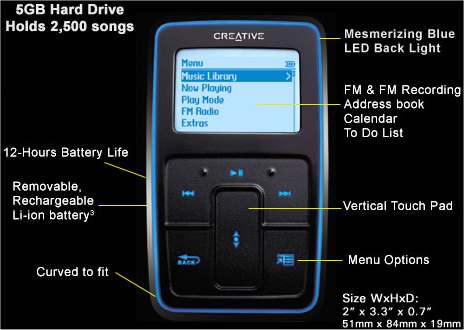 As has been stated in other reviews, the navigation is a little unexpected – most of the work is done via a central up/down slider, and the sensitivity out of the box wasn’t set to what we thought was the best setting. After an hour or so of use, you
get used to the quirks of the navigation, and from then on, it’s actually pretty clever, although manually searching for a keyword is still a long process of scroll-and-accept. Most of the lower half of the front panel is touch sensitive, so the Lock switch on the top has to be set to prevent accidental touches when in a pocket (I can’t help feeling that an auto-keylock, such as those on a mobile would be a nice touch!)

Audio quality is superb and can’t be faulted, and the features built-in make using the device a dream.

As we’re a site dedicated to TV and Radio, we opted for this model as our favourite due to the fact is has an FM radio onboard – well, we all get sick of hearing the same old MP3 tracks, and catching the travel news on the train is really useful.
The Zen can also record the FM it’s listening to, for listening later – great for recording shows at work and catching them on the train home. The Zen Micro has 32 nameable FM presets.

We’re also a fan of the way that you can select what to listen to – you can obviously play through all of your MP3s and make use of playlists (that you create on the device, or copy over from the PC), but you can also browse by genre (Rock, Pop,
speech, etc… the information’s encoded into the MP3 files) – you can also play selected albums, search by artist, or use the rather nifty DJ mode (that can randomly pick an album of the day, do random play, play your most popular tracks, or offer you a “rarely heard” selection. 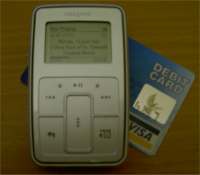 The Creative software can be used to copy across your address book, to-do tasks and calendar entries from Outlook – another bonus. Oh, and the Zen Micro can also be used as a USB storage device, so you can use it to transfer files, documents, video etc for use on any PC with a USB port (you can specify how much of the 5Gig you want for this storage – between 128MB and 4GB)

The PC software supplied with the Micro is pretty good, but before we got going with our review Zen, we upgraded to v2.00 of the firmware, which meant we could use Microsoft’s Media Player to handle copying our tracks across – definitely our preferred option.

Copying songs across was a piece of cake, and faster than we expected – partly down to the USB2.0 compatibility. The stated figure of 2,500 songs makes an assumption that Windows Media Audio (WMA) is being used. For MP3 files, the figure is likely to be closer to over 1,000 tracks – but that still more than enough to hold an impressive amount of audio. 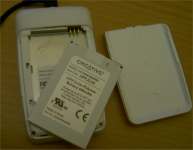 No real downsides to report – With the possible exception of the battery life. It’s rated at 12 hours by Creative, and some reviews we’re read state that this is achievable… although we’re seeing around
8 hours of practical use. The Creative website states that the battery life is reduced if you’re making a lot of use of the hard-disk (and admittedly we’re hammering the hard drive on ours), but surely that’s what you want to do with a device like this? Ultimately, this isn’t much of a problem though, as our device came with a spare battery, and the USB lead (a standard mini USB) can be used to charge the Micro (for times when you’re not lugging the mains adapter with you). Fortunately, the battery is removable and very easy to change – unlike some other MP3 players we could mention

We’re very impressed. This beats the iPod Mini hands down on features (FM radio, removable battery, support for WMA format, voice recorder and Outlook Contacts/Calendar synchronisation), and is very good value for money. Its style, pulsating blue light, and the tiny size make it a great conversation piece too.