Radio and Telly zooms in on this top sci-fi comedy, the film that doesn’t take itself too seriously

What is Galaxy Quest? 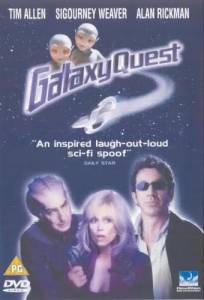 This is a cracking little film from 1999 is a must-see, especially if you’re a Star Trek fan with a sense of humour.

As we know, playing James T Kirk in the 60s version of Star Trek made William Shatner a household star. In this film, Tim Allen takes on the Shatner role, playing actor Jason Nesmith. Hie was captain of the NSEA Protector back on TV in the 60s, and hit career has hit the skids. Together with the other cast members, Jason resorts to supermarket openings and geek conventions. Until things change.

One day, after another disappointing day as a has-been actor, there’s a knock at the door. It seems that a real-life bunch of aliens have been watching broadcasts from our planet for many years, and they need the help of the Protector crew.

The Thermians, played to perfection, are being brutalised, and need help. Having monitored our transmissions, they believe that the cheesy 60s sci-fi series is a documentary, and that the bunch of aging actors are the Thermians “Only Hope”

This is a gem of a film. It has a gentle dig at Star Trek fans, but as many of the jokes will only make sense to die-hard Trekkies, it will raise a smile. Classic issues such as the fact that the security offer beamed down to a planet is the first to die, and the captain always gets to expose his chest during a battle with an alien. Lots of techno-babble with the Beryllium Sphere (a.k.a Dilithium Crystals), plus some Trek-like dilemmas for the actors-cum-astronauts to resolve.

Great moments include the planet-battle with the rock monster, and the Spock character (played by Alan Rickman) getting irritated by the over-use of his catchphrase that’s dogged his career. Communications Officer Gwen DeMarco (played by Alien star Sigorney
Weaver), is the badly-written female lead – she holds the group together, but just as with Star Trek’s Uhura, her part’s not perfectly formed, and her sole job is to repeat what the ship’s computer has to say. “I’ve got one job on this lousy show, and I’m going to do it!”

To get a taste of the move, see the video trailer below:

This is a great film, and one that doesn’t take itself too seriously. Well worth a watch. Never Give Up, Never Surrender!

The DVD doesn’t come with a huge amount of extra material, but still, a couple of bits that lovers of the film will enjoy:

One thing missing from the DVD though – outtakes. The film must have been a hoot to make, and I imagine somewhere, there’s an out-takes reel doing the rounds. just a shame it didn’t make it to the UK DVD release.

One of the deleted scenes does answer a key continuity error though – Gwen’s uniform is seen to be intact in one scene, and ripped in the next. One of the cut sequences explains what I assumed to be a movie gaff.