A look at the unusual Channel 4 comedy series, summed up on the rear of the DVD as “Hilariously disorienting”…

You’d be forgiven for assuming that Peep Show is some kind of Game On / Men Behaving Badly hybrid – after all, the two main characters are dysfunctional males that are living together under one roof – one an introvert with a stable office job, and one cooler joy with his own set of character flaws). Once you’ve seen a few episodes, you’ll realise that Peep Show is quite a bit different to those shows, covering a number of taboo subjects from a unique “first person” perspective. 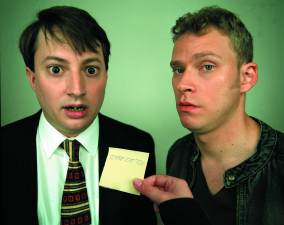 This gives you a peep into the rather distorted worlds of the two leads… Mark, the frustrated, overly shy office worker is desperately chasing co-worker Sophie (Olivia Colman). Jeremy’s in a band, hoping that his big break is around the corner… Where this differs from your average ‘two lads’ sitcom, is that events are witnessed from the ‘first-hand perspective, complete with unspoken thoughts.

This is one of those series that requires you to watch a few episodes before you ‘get it’. The first-person perspective takes a little getting used to, and this isn’t a ‘funny’ comedy in the obvious way. The camera work adds to the edgy feel of this series too, as it captures events from the star’s viewpoint (sometimes through a pint glass). 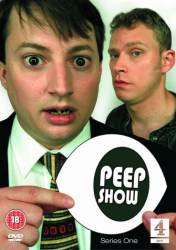 The Series 1 DVD includes a number of extras, including 6 specially filmed stand-alone scenes plus audio commentary over two episodes by the writers and the main characters.

The series saw something of a gear-change in Series 2… I can’t help feeling that after reviewing the TV ratings, Channel 4’s execs asked the producers to ‘tune it down a bit’, to de-weird it in an effort to increase its appeal to a wider audience.

If you liked another Channel 4 comedy gem, Spaced, you’ll love Peep Show – personally, here in the office, we love it… one of the truly different comedies to grace our screens