Broadcasting locally, wherever you are in the Nation, this is Britain’s first National Local Radio Station – Radio Active.

Classic BBC Radio comedy from the 80’s remembered by many – especially those working in the commercial radio industry! The series transferred to TV, becoming KYTV, the spoof satellite TV channel.

What was Radio Active?

Radio Active was a BBC radio comedy series that ran on Radio 4 between 1981 and 1987. The series later transferred to TV. On this page, we look at the history of the show, the characters, and the episodes of this much-loved radio comedy classic. 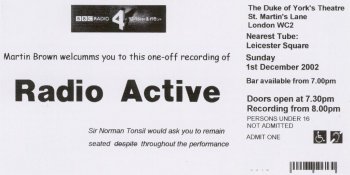 It’s been 15 years since Radio Four last linked up with Radio Active, and a lot has changed. For a start, the station’s ownership has changed, after Martin Brown inadvertently gives it away as a competition prize. With the advent of DAB, the station has gone Digital, and Radio Active is set to launch 25 channels of radio, including kids channel ‘Tiny Mindies’, and the 24 hour footwear station, ‘Radio Active Shoes’.

The old favourites are there – Martin Brown, Nigel Pry, Oivind Vinstra, and Anna Rabies. Back in style too is the Drama Repertory Company with their moving adaptation of Doctor Zhivago and Mary, June and Honest Ron are still cropping up on commercials. Some superb writing (i.e. the Radio Active House), great musical performances from Philip Pope, and the usual top-notch performances by Helen Atkinson-Wood, Geoffrey Perkins and Michael Fenton-Stevens, plus, of course, one Angus Deayton (who was the subject of a little ‘abuse’ from the rest of the team). Superbly slick recording, introduced by producer David Tyler (earlier series producers Jamie Rix and Paul Mayhew Archer were in the audience too)…

Recorded, but sadly not making it into the final transmitted version, were: Intro theme, the Gwyneth Paltrow / Oivind Vinstra interview , the Martin Brown / Diana interview and the OwasteofSpace (Oasis) spoof song.

Radio Active ran on BBC Radio from 1981 to 1987. Below is an episode listing, including the pilot, Christmas special, and the 2002 reunion show…

For details of when you can next catch Radio Active or KYTV on UK radio or TV, give the DigiGuide listings service a try. For more on DigiGuide for TV and radio listings, see our Digiguide page.

For what it’s worth, here’s my contribution – a couple of rather dog-eared pages from one of the old Paris Studio recordings. Click for a larger image…