RDS, standing for the Radio Data System, arrived in the UK in the early 90s, adding a basic data and text service to FM radio.

This page contains information and useful links relating to RDS.

Most FM radio stations in the UK use RDS. Along with the audio, small amounts of text and data are transmitted with the radio signal, and can be picked up and processed by radios that have an RDS decode built-in. Such radio receivers can display this information. The information commonly transmitted is:

Click on the following link for an MP3 version of the RDS radio promotion transmitted in the UK in the early 1990s: Ford RDS Promotion

Apart from the station name, this is probably the most useful and visible part of the RDS system. When a radio station starts a travel report, they instruct their transmitter site to switch on the RDS TA travel flag. Radios with RDS can see this flag, and get the radio to tell the listener that there’s a travel report. A radio can do this by interrupting the tape or CD that’s playing, or by increasing the volume, to get the listener’s attention. This is an incredibly useful service for motorists, and by listening to a local radio station, you can keep up-to-date with local road conditions and travel flashes, without having to listen to the station’s DJs, music and commercials.

If you listen to local radio, you may hear a series of three tones or beeps played before and after travel and traffic reports. Many think that these tones are the RDS flag, but they’re not – although they are associated with RDS. In order for a transmitter to know that Travel is being broadcast, the radio studio has to tell it, by switching on the TA flag. As studios are often some distance from the transmitter, the studio play a recording of three DTMF tones as part of their travel service. A box at the transmitter site listens for those tones, and when it hears them in the programming, it turns on the Travel Flag. This concept was designed in the 90s by the Engineering team at Essex Radio, in Southend-on-Sea, and has since been used at many of the independent local radio stations across the UK.

Handheld RDS radios start from about £40, and many new cars come with an RDS radio as standard. RDS portable radios, such as the Roberts Rd49, pictured here, can be found at John Lewis.

We also want to give a quick mention here to RDS-TMC. 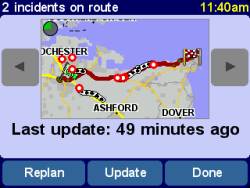 RDS-TMC stands for Radio Data Systems Traffic Message Channel. It’s road traffic information send over FM radio to special in -car receivers. In the UK, RDS-TMC data is collected by the company ITIS, and sent out over-air on Classic FM.

Some new sat nav devices are capable of getting RDS-TMC data, and updating routes to avoid traffic hotspots. The service is compatible with a number of TomTom Sat Nav devices, including: TomTom Go 510, Go 710, Go 720 and 910 units. A special RDS-TMC receiver is required.

Other questions? – Please ask in our forum.