Cracking TV series with Dom Joly bringing Candid Camera into the 21st Century. If you missed the Channel 4 series, catch it on video, or get the DVDs (with bonus material). 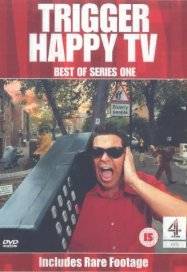 Trigger Happy TV, in it’s day, was huge. Dom Joly burst onto our screens with an almost brand new style of comedy, and it was the talk of the country.

The premise behind Trigger Happy TV is a simple one. It’s a hidden camera show, where Dom Joly’s out-and-about doing something odd – examples include:

To remind ourselves just how cool this series was, we’re looking back to the Series 1 DVD. This contains eighty minutes of Trigger Happy goodness, and is the best from the first series. Around half an hour of the series has been cut in order to squeeze the best bits onto a single DVD, but the best stuff is definitely here.

What’s great though, is the bonus stuff crammed onto the disc. There’s an eleven minute section that contains a whole new section of material that I don’t recall seeing on TV. After this Comedy Lab section, there’s some background on how Trigger Happy TV got started,and what Dom Joly did before the series started. It seems Dom used to do various skits for satellite TV – in the Mark Thomas alternative comedy / political vein.

All of the Trigger Happy TV series are now available to buy, and you can also get them online. If you’ve not seen Trigger before, or not seen the series repeated recently, do yourself a favour and have a fresh watch.

Been wondering what Dom’s been up to since Trigger Happy TV? In January 2005, was back on our screens with “World Shut Your Mouth”. More Trigger Happy-style antics, this time from around the world. 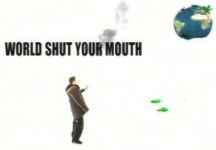