In January of 2004, Nokia announced ‘Visual Radio’ as an upcoming product for their new range of multi-media phones. Since then, Visual radio has been supplied as standard with a number of Nokia phones powered by the Symbian operating system. This page provides an overview of Visual Radio.

Visual Radio is intended to enhance traditional FM radio, by adding interactive content over the mobile phone network. Data can include images and text – supplying listeners with Visual Radio handsets with extra data including news, music, travel, sport and extras.

Here’s the type of content that it was hoped Visual Radio would offer:

When Visual Radio launched, the main broadcast partner in the UK was Virgin Radio. Pictured below is a picture of the Nokia 7710 device, the first device to make use of Visual Radio: 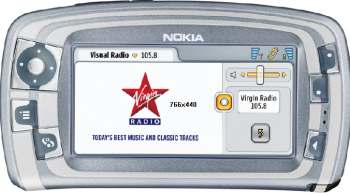 Now, here’s a screenshot of Visual Radio running on a Nokia N95 handset 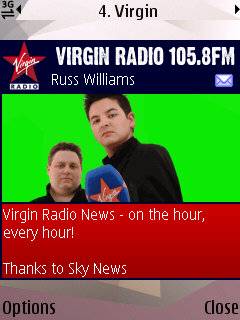