A closer look at the iAudio D2 from Cowon

It’s getting harder to call an MP3 player an MP3 player these days – considering they now do so much more than play a handful of MP3 files. The iAudio D2 is the latest little device to drop onto our desk for review, and we love it. Don’t be fooled by it’s titchiness, this is a powerful micro media machine. 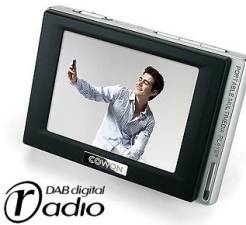 What does the iAudio D2 offer?

Well, it’s an MP3 player with either 4, 8 or 16 gig of onboard memory. It accepts SD and MMC cards for expansion. As well as playing music in a number of different formats, it also does the following:

Amazingly, it also has a crystal clear QVGA touch screen. Oh, and did we mention that it’s tiny?…

This little media player has the following impressive specs:

First off… this is one tiny little device. Slightly bigger than a matchbox, but smaller than a cassette tape, this is a comfy hold, and it’s packed with a stack of features not even found on the iPods and Creatives of this world.

We looked at the 4 gig version of this back in 2007, and have since got our hands on the 16gig version. We’re still impressed by the features and size of this device. It remains one of the best handheld DAB radios we’ve used.

We reviewed this player for FrequencyCast, this site’s regular online radio show – Take a listen to Show 19 as a podcast. We also reviewed the iAudio D2 16 Gig version in our October 2008 show – Listen online to Show 31.

The big seller on this small device, is the touch screen. It’s not something you’re used to finding on such a small device, and to be honest, you really do need a touchscreen these days. No other navigation is as easy to use or gives you more flexibility. 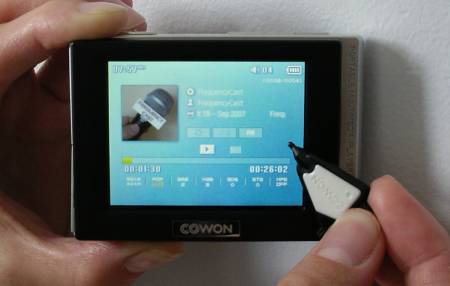 The touch screen is well implemented. It’s now always quite as responsive as we’d expect, but that doesn’t hinder use. The iAudio D2 has a handy Lock slide switch on top, which you can slide to prevent accidental presses of the touchscreen when the player’s in your pocket.

The iAudio is so small, that there’s no room for a standard stylus – you’re supplied with probably the smallest pointer we’ve ever seen… a little like a guitar plectrum, and almost bound to get lost, despite the bit of string you can tie to your keyring, or the iAudio itself. 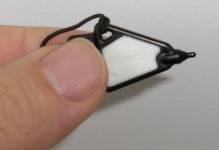 Navigating around the user interface is fairly intuitive – there’s a main menu, pictured below, then a screen for each of the applications. The text size is, perhaps, a little small, and applications like the MP3 player cram in so much information (album cover, duration, levels, EQ settings), that the display can be a little crowded, but it’s perfectly usable, and in many cases, nice to have access to all the display options you need without having to drill down through menus.

We were particularly impressed with the DAB radio screen layout, and the fact that each radio station’s Radio Text was displayed clearly by default.

Screenshots of the iAudio D2

Pretty impressive. We were a little worried at first when we saw the headphones – as you expect with most MP3 players, the headphones are standard and nothing special, but the iAudio’s had four contacts, not the standard three, so we expected our more pricey Shure E3Cs not to work – but they did.

The player has probably the most comprehensive range of onboard audio processing we’ve seen – a very impressive graphic equaliser, BBE, Mach3Bass, 3D surround, Stereo enhance, MP enhance, pan, and even a variable play speed (50%-150%). Far more than anyone wants (or probably understands), but as there are some half decent presets, plus the ability to customise loads, this should keep the audiophiles in their element.

FM radio is pretty good – and seems to get a decent enough signal using the headphone wire as it’s aerial. The DAB radio is ok in areas of decent DAB reception, but as with most devices that use the headphones as an aerial – it’s a little more flaky where the signal isn’t so strong, or where you’re on the move lots. Click here for a few seconds of DAB recorded on the iAudio (386kb, mp2 format) 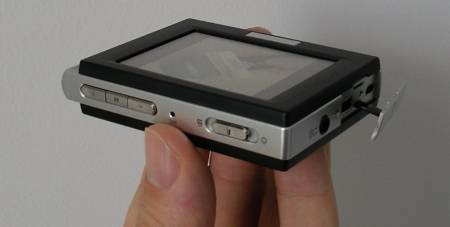 Top and side view of the iAudio D2

Podcasts on an iAudio D2

The Box proclaims “Podcastready” – which we assumed meant that it was capable of playing MP3 podcasts (what mp3 player isn’t?). What it actually refers to, is a little application installed onto the memory of the device that enables you to select and download podcasts. The application doesn’t need to be installed on your desktop computer, so is nice and portable.

To get new podcasts, it’s a simple case of connecting to any PC or Mac via USB, then running the application from the iAudio’s drive. It then uses your computer’s connection to download new episodes of your podcasts. We’re glad to say that our podcast, FrequencyCast, appeared in PodcastReady’s list. Thanks guys! 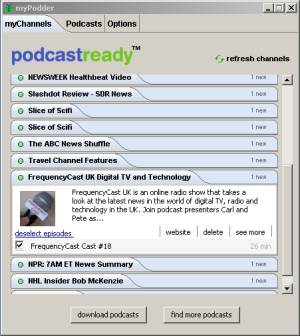 Recording on an iAudio D2

You can record DAB radio, FM radio or voice. There’s also an option in one of the menus to record “Line in” or via an external mic, but that requires a lead that’s not supplied as standard. For recording voice and FM, there are options to select quality (from 32 to 256k).

Tucked away in a covered panel on the left of the iAudio, you’ll find the power connector and the mini-USB connector. The unit’s supplied with a mains adapter, or for extra convenience, you can recharge from a computer’s USB socket (7 hours to charge from USB or 3.5 hours from mains)

A quick rattle through some of the other features we’ve not covered so far – there’s an alarm clock (wake up to music, FM or DAB – although you’ll presumably need to connect to external speaks for this to be useful). You can browse text files, there’s a notepad for scribbling on and doodling, an onboard Adobe Flash player (for games and small apps), and two calculators (one standard, and one scientific)

Under the ‘Settings’ option, you’ll find controls to allow you to change display brightness, set backlight timeout, alter font colour (but not size), add a wallpaper, and change the scroll speed. There’s also the usual Shuffle settings for your MP3’s, plus the option to build a “dynamic Playlist” of tracks.

Below is a picture of what we found inside the iAudio D2’s box: Headphones, the tiny stylus thing, USB 2.0 cable, power supply, Quick Start Guide, and a CD. 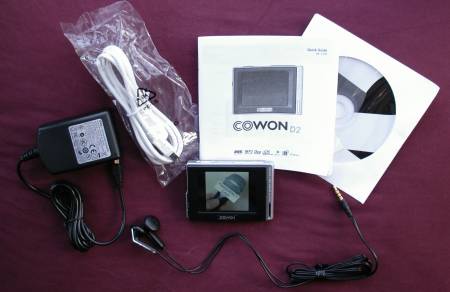 The Swiss Army Knife of pocket multimedia players – if you’re into travelling light, then this could well be for you. There’s enough space to put a decent selection of music, video, games, text and photos onto, and with DAB and FM radio, you’ll be shouldn’t be stuck for something to listen to.

DAB did it for us – we like our DAB radio, and this is the smallest device we’ve seen that allows playback and recording of DAB – although the DAB radio does rely on getting a decent DAB signal via the headphone wire. The construction of the unit is solid, the device is nicely styled, and it’s hard to fault. The screen is perhaps a little too reflective and not always as responsive as we expected, but the sheer fact that it’s a touchscreen makes up for it – it’s really the only way to browse and select content, plus steer around a device.

The touchscreen, size and (for us) the addition of DAB radio, makes this a top choice for those that like their gadgets, and want to cram as much media in as small a space as possible.