ITV sitcom from the mid-eighties about an over-the-top commercial radio DJ, Kit Curran. The first series was mostly set in the studios of Radio New Town, and centred around various battles with Roland Simpson, the station manager.

Classic moments include the first episode’s mission to drive out the ‘new broom’ Roland by convincing him that the station was run-down, riddled with asbestos, and with a severely speech-impaired newsreader.

Kit, a totally self-obsessed egomaniac, ended the series by failing to get a job on Radio 1. Preparing for the interview, he’s deciding how to present himself at the interview. Les tells him to “just go as yourself”. Kit’s reply. “Yeah, but which myself shall I go as?”

The Kit Curran Radio Show was originally broadcast on Channel 4 in April and May 1984. There were six episodes:

Written by Andy Hamilton and Guy Jenkin, who went on to create another media sitcom, Drop the Dead Donkey. 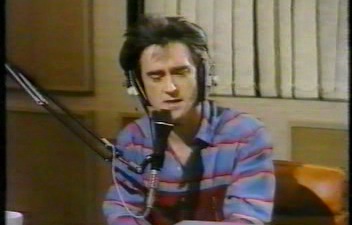 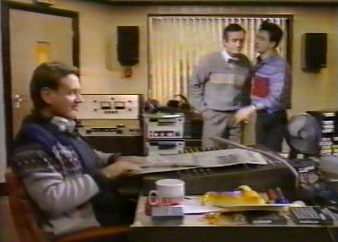 On air in the Radio Newtown studio 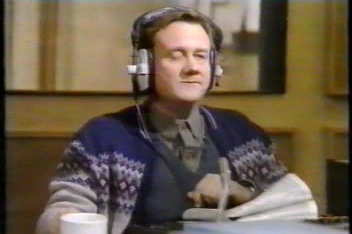 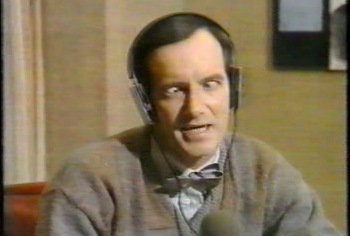 The second series wasn’t a patch on Series 1… sacked from Radio Newtown, Kit’s turned into a radio pirate radio presenter broadcasting from an industrial park. Episodes mostly revolved around failed attempts to score with the owner of a fashion house in the next office.

The episides were as follows, and they originally aired in 1986:

Click here for a brief MP3 extract of Series 1, Episode 1. Denis Lawson, the star of the series, also released the theme tune on vinyl ” Ultra Fantastico” in 1984.

We’d love to see the Kit Curran Radio Show Series 1 make an appearance on DVD… Anyone know how we can get hold of a copy? Let us know