The Lobster 700TV was launched in the UK on the 1st of October 2006, on the Virgin Mobile phone network. The launch campaign featured a TV commercial with Pamela Anderson watching TV on her Lobster 700. As this was the first phone in the UK to support the new TV service from BT Movio, and DAB radio, we created this page to focus in on the features of this phone.

This is a Windows Smartphone, powered by v5.0 of the Windows Mobile Smartphone operating system. As such, it’s a powerful smartphone with a range of features, including:

The real seller for us though, was the powerful DAB digital radio and TV service that the phone offers, and that’s what we’ll explore here.

The Lobster 700TV smartphone doesn’t get it’s TV pictures over the Internet, like some other TV-on-a-mobile services out there – we like this, as it means you’re not paying expensive GPRS download fees to get streaming data. Instead, the Lobster gets signals over-the-air, just like a TV set or FM radio does. The important difference though, is that the TV is transmitted over the frequency range allocated to DAB digital radio – so with this Lobster, you’re watching TV on a digital radio.

The TV service is provided in this way via a service provided by BT, called BT Movio. As it’s usual digital radio, there’s a limit on the number of services that can be transmitted, and at the moment, there are only five channels being carried on the Lobster. These are:

Below is a picture of the Lobster’s Electronic Programme Guide (EPG), which shows seven days of listings for the BT Movio channels. When you first use the Lobster 700, the programme guide is empty. To get this to populate with programme information, it seems that you have to tune in to the TV channel and wait for a few minutes while the Lobster downloads the EPG in the background over-the-air. As there’s seven days worth of information, it can be a few minutes before everything’s downloaded. The EPG is quite useful, and you can select a programme reminder to let you know when a show’s about to start. Here’s a screenshot of the fully populated EPG: 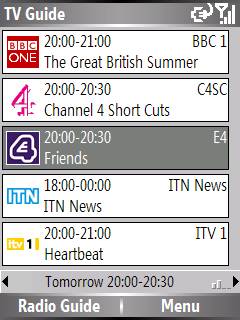 The Lobster 700TV also supports Interactive content associated with the radio and TV channels on the Lobster. There’s a special “press the red button” button to the right of the screen. Pressing this button opens the phone’s web browser and downloads extra programme material over the Internet. Typically, this will take you to a page formatted for use on a mobile phone, and content includes access to news, programme listings / features and general information on the TV or radio channel. 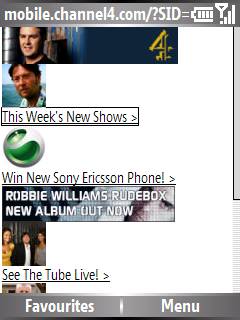 One little oddity we’ve found while watching TV on our Lobster 700, is that on occasions, items in the EPG show as ‘Not Available’. It seems that it’s only on certain programme types, and our guess is that this is a licensing issue between TV company and programme-maker… some programmes are only licensed for broadcast in a certain way (terrestrial / satellite / cable, etc), and there’s been no deal to syndicate some types of programming over DAB.

DAB radio on the Lobster 700

Got a question on the TV and radio capabilities of the Lobster 700TV, please let us know and well try to help

Q. New channels. “Just wondering is there any chance that Virgin might expand the service to add different channels, for example BBC 2 or Eurosport.” – From David, Oct 2006

A. The TV service is provided by BT Movio, and in mid-2007, they announced that the service will be discontinued – so it’s unlikely there’ll be anything new on the Lobster.

A. Actually, the real question here, is: “Is DAB Digital Radio available in your area?”, as the Lobster 700TV uses DAB for it’s TV and radio reception. The following is from our DAB FAQ: DAB is reportedly available to 80% of the UK. You can check on the availability of digital radio in your area with the UK Digital Radio DAB postcode checker. You may also want to take a look at the BBC reception site for some useful information on receiving DAB.

Q. “I have purchased a Lobster700tv and haven’t been able to tune in either tv or radio, we are following the instructions but nothing happens” – From Madeleine, Dec 2006

A. To get TV and radio on your Lobster, you need to be able to be in range of a DAB radio transmitter – see the question on this above. If you are in range, but still can’t get any reception, there are several things you can try, such as repositioning the aerial (the headphone lead), or trying to scan for channels in another area. See the general advice on improving your DAB reception on our DAB Reception FAQ

Q. “Not available”. I have a Lobster and sometimes, especially on ITV, certain programmes and adverts are not allowed to be shown on it. Why is this? – From Stephen Wilton May 07

When you see the message “Not available” in the EPG listings or when trying to watch a show, this normally means that there are restrictions on broadcasting the content, due to the type of legal agreement between the broadcaster and the distributor. It could be that the supplier of a film has only authorised the film for broadcast on standard TV or satellite, not over the Movio system.

Q. Can you recommend any devices that can improve and stabilise the reception? Would Bluetooth headphones work? Is there a step up from the Lobster Jack (female) to allow the fitting of the more standard 11mm jack – From Allan Glen Jan 06

A. According to the TV licensing site: “You need a TV Licence to use any television receiving equipment such as a TV set, set-top boxes, video or DVD recorders, computers or mobile phones to watch or record TV programmes as they are being shown on TV. “

Q. How much does it cost to watch TV on a Lobster?

A. See the answer on the FileSaveAs Lobster FAQ

Q. Can I use the Lobster 700 to watch TV overseas? My ISP able to use GPRS service.

A. The Lobster 700 TV uses UK DAB radio channels to receive radio and TV, so the TV and radio service discussed on this page will only work when in the UK and in range of a DAB radio transmitter. That having been said, the Lobster 700TV is a Windows Smartphone device and comes with Windows Media that can stream video over a data connection, so you may be able to access streaming audio and video content that’s available on the Internet.

A. When the Lobster launched, it was announced that BBC One would be on the phone for “at least one year”, and that year is up in October 2007. We have no information on what will happen in October – presumably that’s a discussion that BT Movio and the BBC need to have…