We’ve been fans of the Creative Zen Vision:M for some time now – who needs an iPod when the Zen has more features anyway?

There are now hundreds of MP3 devices out there, and the number of video and MP3 players is increasing. The Apple iPod range is notably the most common such device out there, but on this site, we’re far more interested in Creative’s
Zen range because as well as playing video and MP3 files, the Zen Vision and Zen Micro have something extra, notably FM radio… 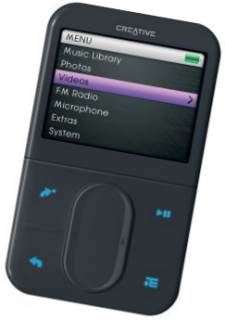 New for 2006 is the Creative Zen Vision:M. This has the following impressive specs:

The Creative Vision:M is an incredibly powerful little media player, following on from the success of the Zen Micro. We’ve been fans of the Zen range for a while – mostly because these little devices offer functionality over design when compared with their iPod equivalent. Features such as FM radio, a syncable calendar, voice recorder and support for a wider range of formats, makes Zen an attractive choice when compared with the competition. 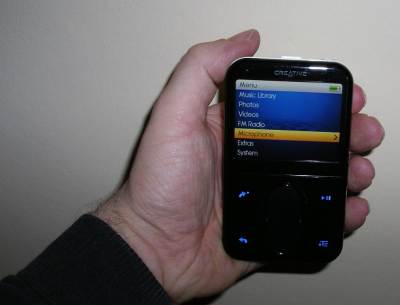 This really is a nifty device – It’s a little larger and heavier than the Zen Micro, but then with the addition of video, a 30Gig drive and a higher-capacity battery, this is to be expected. Comparison with the video iPod is obvious – and, yes, the iPod Video is thinner and a little lighter – a shame, but for us, features vs. style wins every time, and we feel that this is excellent value for money.

Using the Vision:M is pretty straightforward, especially if you’ve used a Zen product before – the majority of the scrolling through your media collection is done via a central up/down slider – after half an hour of use, you get used to the slightly quirky navigation, and from then on, it’s actually pretty clever. The scroll navigation is complimented by a play/pause button, menu, back and shortcut buttons. A handy switch at the top ‘locks’ the front panel from accidental presses whilst in the pocket, and is also the on/off switch.

Audio and video quality is superb and can’t be faulted, and the features built-in make using the device a dream. Everyone we’ve shown this to can’t help to be impressed – we’ve got over 3000 photos, nearly a thousand bits of audio and a good collection of video clips in various formats on our device. The colour screen is crystal-clear and watching video on this really is a joy.

As we’re a site dedicated to TV and Radio, we opted for this model as our favourite due to the fact is has an FM radio onboard – well, we all get sick of hearing the same old MP3 tracks, and catching the travel news on the train is really useful. The Vision:M can also record the FM it’s listening to, for listening later – great for recording shows at work and catching them on the train home. The FM radio supports 32 nameable FM presets.

With 30Gig of disk space to play with, you might expect navigation and file selection to be something of a nightmare. The Vision:M has a fair number of ways of addressing this – for a start, video, audio and photos are all divided into their own categories, with different methods for accessing your stuff:

Audio: Windows-like folders are supported, you can make use of playlists (that you create on the device, or copy over from the PC), but you can also browse by genre (Rock, Pop, speech, etc… using the information’s encoded into the MP3 files) – you can also play selected albums, search by artist, or use the rather nifty DJ mode – which can randomly pick an album of the day, do random play, play your most popular tracks, or offer you a “rarely heard” selection.

Photos: If you have a large collection of photos already on your PC, you can simply copy these over (in their original folder structure), and this will be mirrored on the Vision:M. Once on the device, you see a 5-by-4 grid of thumbnails of your photo collection. You can scroll through them, and single-tap to open an image full-screen. There’s also a list view, a screen showing information on the current image (dimensions, file size & date), and there’s also the option to rate a picture, and view pictures based on their star rating

Video: Again, all folder-based, you can access “Video”, “TV” or “Recently browsed”. You can password-protect certain folders too, ideal for any x-rated video content that you may wish to have on hand.

The Creative software can be used to copy across your address book, to-do tasks and calendar entries from Outlook – another bonus. Oh, and the Zen Micro can also be used as a USB storage device, so you can use it to transfer files, documents, video etc for use on any PC with a USB port (you can specify how much of the 30Gig you want for this storage – between 512MB and 16GB).

The PC software supplied with the Micro is pretty good. We’re using Windows XP, and after installing the drivers on the Creative CD, even before installing the supporting Creative applications, found that we could access the Vision’s internal driver via My Computer, and use Microsoft’s Media Player to copy our audio and video across to the device. We’re also using the Creative Zen Vision:M Media Explorer software, as this supports a few Zen-specific functions that we need access to – such as video conversion, and PDA sync.

Nothing really to complain about so far. We’ve read reports that the frontplate can scratch easily. We’re keeping ours in the little baggy thing that it came with, and so far our screen is scratch-free. Compared with the Zen Micro, the only thing we miss, is the removable battery – a great idea for long journeys, and to alleviate any worries about the lifetime of the battery (something that many iPod users have complained about). That having been said, with the larger capacity battery in the Vision:m, a removable may not have been an option open to the hardware designers.
Otherwise, nothing really to complain about – all of the major formats are supported (a greater range than many other players), the unit has a sturdy design, and the audio and video performance is excellent.
Oh, and before anyone asks, the FM radio in the Vision:M performs a lot better than the Zen Micro’s built-in radio.