Information about Freesat, the subscription-free satellite TV service in the UK. Details of what Freesat offers, how to get it, and help to existing users.

Freesat is a digital TV service that’s backed by both the BBC and ITV. As the name suggests, it offers a number of TV channels using a satellite dish, and there’s no subscription (unlike Sky’s satellite offering).

Freesat launched on the 6th May 2008, and currently offers over 130 channels.

To get Freesat, you will need a Freesat receiver, and to have a satellite dish pointing in the general direction of the Astra satellite. Some High Definition content is available on Freesat, including the BBC, ITV and Channel 4 HD channels. 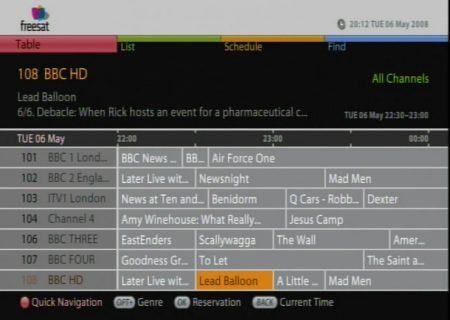 Freesat EPG on a Humax FoxSat

Around 130 channels of TV and 30 radio stations.

How to get Freesat

To be able to watch Freesat, you need the following:

We have a page listing the available Freesat satellite receiver boxes – See our Freesat boxes section.

Here are the Freesat boxes we recommend: