A look back at “Radio”, a 1980s TV drama based at fictitious radio station Radio Phoenix

Very few people remember the series, but those in the radio industry, including this site’s webmaster, loved the show.

We’d be keen to add some more content related to this series. If you have any audio or video tapes or clips, please let us know.

You’ll find a copy of the programme’s introduction here, and the show’s closing jingle here.

Many thanks to site visitor Ian Wegg for getting in touch and letting us have a copy of the last episode of the 1982 series on DVD – great to get to see an episode again after so many years.

From the show’s credits, the last episode was produced by Colin Nutley and Tony McLaren, and directed by Peter Ellis. Here is a screen capture from the show, showing a 1980’s ILR desk in it’s prime: 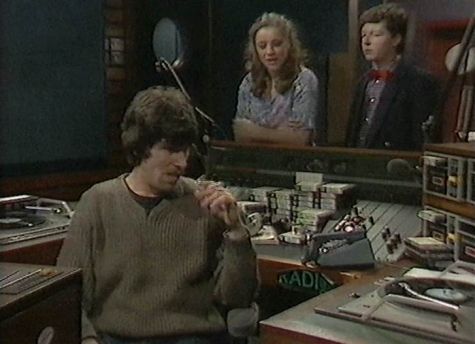 Comments from the cast

Thanks to Milly Scott for getting in touch. She appeared in the series, and told us the following:

I was in the 2nd series of Radio (Radio Phoenix). I was then acting under the name Melanie Parker and I played a teenager called Lacey Warrington – I was only meant to be in 2 episodes but they wanted to write me in again so I came back under the pretext that the last time I was there I’d stolen money for my alcoholic brother!! I actually have these 2 episodes somewhere in the loft – goodness knows where! (I was in 6 episodes all together)

The series was all filmed at the then TVS studios in Southampton on set – nothing on location as far as I’m aware. We rehearsed for just a day per episode in London. My episodes were directed by Matthew Robinson. The series was originally intended to be networked which would have been great but only got as far as the TVS and TSW regions unfortunately!

I lived in London then but the only 2 times I went into the regions it was being shown I was approached by people asking if I was Lacey Warrington and once in Greenwich in the late 90s – MANY years after it was filmed which I was very surprised by!

Ironically I now live in Brighton and present local radio. You can see/hear me on youtube.com/missmillyscott (but not as Lacey Warrington!)