Until October 2013, Top Up TV Anytime was a UK digital TV service that captured over 100 hours of TV content a week, to be watched at your leisure.

Top Up TV Anytime launched in December 2006 and was a digital TV service that let you watch and record live TV, and watch extra content “on demand”.

The services used a special set-top box with a built-in hard-disk that automatically downloaded over 700 TV shows a month that you could view at a time to suit you. Content came from channels such as G.O.L.D, Warner, CBS, BBC, sci-fi channel, National Geographic and Disney. You could also get extra TV channels, including ESPN, Sky Sports and G.O.L.D.

Nothing – The service closed on October 2013.

With the Top Up TV Anytime service, you could get the standard Freeview channels, plus a selection of TV shows from a number of other channels.

Top Up TV’s extra content came in the form of ‘programmes’, not ‘channels’. Before the service closed, there was still a small amount of ‘live’ content from GOLD and ESPN – most of what was on offer was on-demand TV programmes. Sky Sports 1 and 2 joined the Top Up TV lineup in August 2010. Over the course of a week, you’d get up to 120 hours of programmes from a variety of different channels, that were downloaded automatically to your set-top box.

The selection of programmes came from the following channels:

What did they offer?

The Top Up TV Anytime service consisted of a special set-top box, the Top Up TV+ box, that contains a 160, 250 or 500 gigabyte hard-disk, and a subscription to Top Up TV.

As well as being able to receive the 40 Freeview TV channels, this set-top box receives extra TV programmes that received over the air via your TV aerial. This selection of programmes is stored on the Top Up TV+ box, and you can play them back at a time to suit you. Most of these shows are sent overnight, so you can watch them the next day.

How much was Anytime?

To get Top Up TV, you needed to be in a Freeview coverage area (check coverage). No satellite dish or Internet connection was required.

The Top Up TV+ box

We’ve been using Top Up TV Anytime, through various ups-and-downs since December 2006, and this section summarises our findings. We’ll be updating this page as and when there are any major developments, as we continue to put this service through its paces

Out of the box, this is what we got with our Anytime delivery: The Thomson DTI-6300 box, remote control (with 2 AA batteries), a user manual, a leaflet of TV remote control setup codes, a basic aerial flylead, a SCART lead and a mains lead. 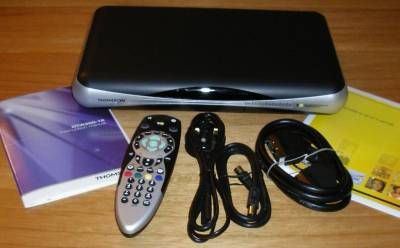 Setting the service up was pretty straightforward – it’s a case of connecting a TV aerial, connecting the box to the TV’s SCART socket and plugging it in. You have to insert the Top Up TV subscription card to get the extra Top Up TV channels and content. To insert the viewing card, open the little cover in the lower-middle of the Anytime box. The card slides in with the gold chip facing down and with the chip-end going in first.

When you switch on the box for the first time, it does a scan for all the channels it can find, both Freeview and Top Up TV. Once the scan’s complete, you’re up and running much as with any Freeview set-top box. You can watch the standard 35-or-so Freeview channels, plus the live content on the Top Up TV channels.

At the time of writing, the reduced channel lineup consists of G.O.L.D and UKTV Style – it’s important to note that these channels aren’t broadcast all day, as they are on Sky Digital or Virgin Media, so you only get a limited amount of live viewing selection on these extra channels.

If you’re looking to enjoy the extra features of Top Up TV Anytime box as soon as you unpack it – you’ll be disappointed. The box acts as a standard Freeview receiver, until you leave it alone for a while. The Electronic Programme Guide (TV listings) gets populated overnight (it has 14 days worth of data to collect), and the first set of TUTV programmes won’t be downloaded for 24 hours, so you have to leave the box on overnight and wait for a selection of TV shows to get downloaded. 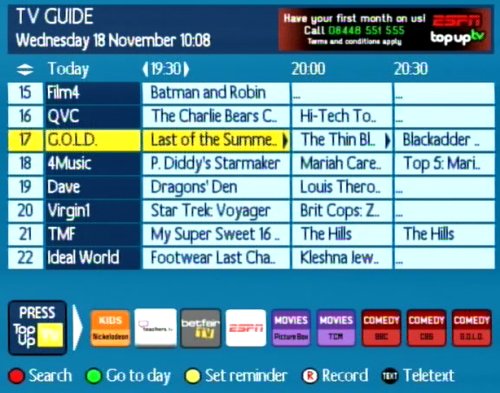 Our experience is that the EPG is pretty fast, and easy to use. In March 2007, Top Up added Series Link, via an over-the-air software update. 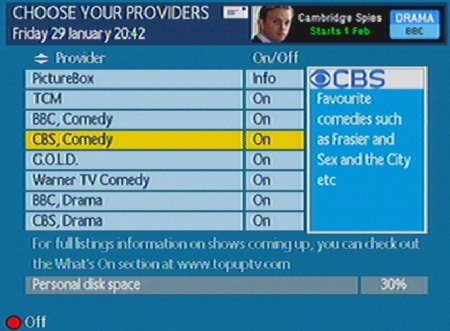 The Recording Library is a big part of the Top Up TV Anytime service, and has its own button on the remote. The library gives you access to Freeview content you’ve recorded, as well as the 100 or so hours of selected content that has been downloaded and stored for you.

Top Up TV Anytime programmes are sent to your box overnight, so it takes 24 hours for the library to populate with content. Different programmes from different channels are sent each day, so it takes seven days to fill the box to capacity with the selection of Top Up TV programmes.

Below is a screenshot of the Library populated with programmes: 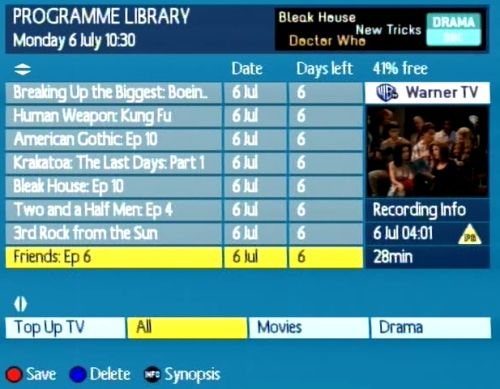 The techies amongst us are always interested in seeing what options there are to play with, so here’s a shot of the set-up menu: 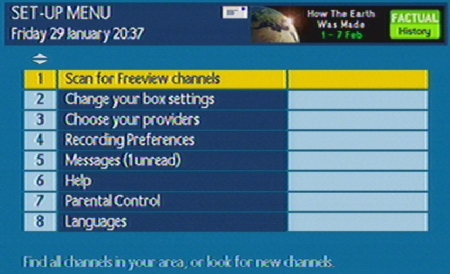 Under ‘TV Setup’, you’re able to select 4:3 or 14:9 widescreen, and you can also set up the SCART output (RGB, CVBS or S-Video). You can also alter the modulated output channel (for TVs without SCARTs). 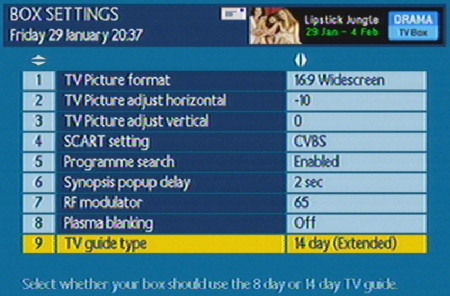 Elsewhere in Set-up, there are options to:

Back of the Top Up TV+ Box

Here’s a list and a photo of the connectors that you’ll find at the rear of the Thomson DTI-6300 Top Up TV+ box… From left to right: RF in, RF out, two SCART sockets, two phono audio sockets, a digital audio out socket, S-video out and a mains socket. The box actually has two separate RF in and RF out sockets – the gray block shown to the left ‘loops’ the aerial feed from RF1 out to RF2 in.

We got hold of the box in December 2006, and our initial impressions were good. Functionality, speed, picture and sound quality all seemed fine. After using the box for some weeks, we started to see the problems that have been reported by other users, including box lockups, corrupt or blank recordings, missed downloads and random crashes. A fix released in January 2007 addressed some of these problems, and further updates seem to have improved stability..

The only real question mark about Anytime relates to the quality of the programmes selected for delivery to the Top Up TV Anytime box. The original Top Up service offered 11 extra TV channels available throughout the day – now all that you get is a selection of shows, not of your choosing, pushed to your box. It can be frustrating to see that a TV channel is running a series you’re interested in – but Top Up TV has decided that they won’t be sending it to you – you get what you’re given! So far, there’s not been much of the 100 hours of TV that we’ve been interested in watching – we were hoping for a little more comedy, and a little less ‘kids’ and cartoons, but maybe that’s just the Radio and Telly team for you…

Since our review’s been live, we’ve had a number of questions – so we’ve added some answers to the most commonly-asked ones…

Got a question on Top Up TV? Ask in our forum